A Guild member mentioned earlier this year that he had changed from producing a quarterly newsletter to writing a blog – given the length of time since my last post, perhaps I should be doing the opposite!
There has been activity on the study throughout the year so far. January saw the official release of the 1911 census. I’d already had a preview of this with a beta trial just before Christmas (not the most convenient of times, but it was an opportunity for a few surprise presents.) During the trial, I had collected all of the Parrys in the available counties. However, some of these needed re-doing after the official release, since the totals had changed. This will continue to happen, as corrections are made to the transcriptions – already some of the counties released in January are showing differences to the previous numbers of Parrys, so those need investigating. The census is also being released in stages – with all of England now completed but with Wales, the Channel Islands, and the overseas military, still to come. The current total for Parrys is 13,772 but I expect that will double by the time the whole census is released.
Another database released earlier this year was Ancestry’s transcription of the GRO Birth Indexes from 1915-1983, something previously available from them only as images. This makes it easier to collect the information and helps me move closer to the recommended ONS goal of collecting all BMD details. I am now systematically working through the images to check the transcriptions and add the mothers’ maiden names. One benefit of the searchable database is that it is now possible to easily identify other surnamed entries where the mother’s maiden name was Parry, although following such lines is certainly not a priority for me.
There have been several marriage challenges during the year, one of which unfortunately I was too busy to submit anything for, since there were about 80 entries to be checked. I am now involved in helping with the Birmingham challenge and it is interesting to see how the challenge principle is changing, as some people "adopt a church" rather than searching across a whole registration district, and others choose to either limit submissions or not carry out certain look-ups. As usual though, the results received have set me searching the censuses for more information, which has resulted in some interesting trails. Even with a common surname like Parry, some people stand out as individuals and "Pluvius Cambria Parry" is certainly one of them. With a father from Flintshire and a mother from Hertfordshire, I wonder whose idea it was to name him "Rainy Wales Parry."
Sometimes Guild members offer other look-ups and a recent "newspaper challenge" by Richard Heaton produced several references to a Mr Parry’s vocal performances, as well as a report of the theft of a cash box from a Thomas Parry in Ross. The box contained gold and silver worth £6, but also "a beer-house Licence, and two Receipts for insurance", so I hope there were no accidents in the pub while he got that sorted out. The relevant entry can be found on Richard’s web page.
On other occasions, information arrives unexpectedly, as a photograph of a Parry war grave recently did, thanks to Anni. Although only the initial is shown on the stone, his number allowed me to identify him as a Thomas Parry, who was born in Anglesea, the son of a Henry and Jane Parry. I was also able to find the family in the 1891 and 1901 censuses. 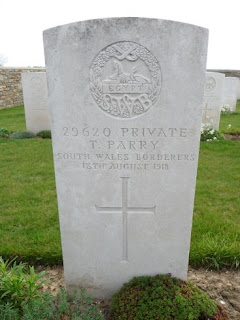 Correspondence so far this year has included 17 new Parry contacts, as well as ongoing discussions with several others. I’ve also had the opportunity to visit both the National Library of Wales and the National Archives for the first time (not that I actually found what I was looking for in either place, but I still collected a few Parrys.)
But there is one thing that has dominated my thinking since the 1911 census came out – the reason why my great grandfather should have found himself in Hereford County Prison. I’ve often wondered whether I have any "black sheep" in the family – but I hadn’t expected to find one quite so close to home.
Hopefully, it should make an interesting story - when I finally track down all the paperwork!
Posted by Barbara Griffiths at 12:11 PM 2 comments: