I heard today that Geoff Riggs has passed away. I first met Geoff at a family history fair at Stoneleigh in 2002. At the time he was one of two people manning the Gwent FHS stand but we somehow got talking about One-Name Studies – I was thinking of joining the Guild, having seen all the good advice being provided on the forum about searching the 1901 census, which had recently been re-released. As I continued chatting to the other Gwent member, I became aware that Geoff had left – only to re-appear shortly later with the Guild treasurer, who was ready to take my membership fee!

It’s always stuck in my mind as an example of how Geoff made the most of opportunities to promote the Guild and, whilst I didn’t know him as well as many others did, his enthusiasm for genealogy was always apparent.

The photograph shows the roller banner produced for the Welsh area, which Geoff brought along to the Guild Conference in 2009 – I was thrilled to see the Parry surname being advertised so prominently. 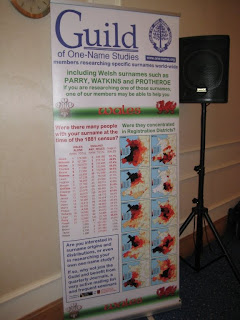 Geoff’s own web site at http://www.riggs.org.uk/Study/Riggsologist.htm shows the impressive work he’s done and an obituary by Roy Stockdill can be found at http://archiver.rootsweb.ancestry.com/th/read/GENBRIT/2011-06/1307901493 .

No doubt there will be many more tributes in the coming days.
Posted by Barbara Griffiths at 9:58 PM No comments: